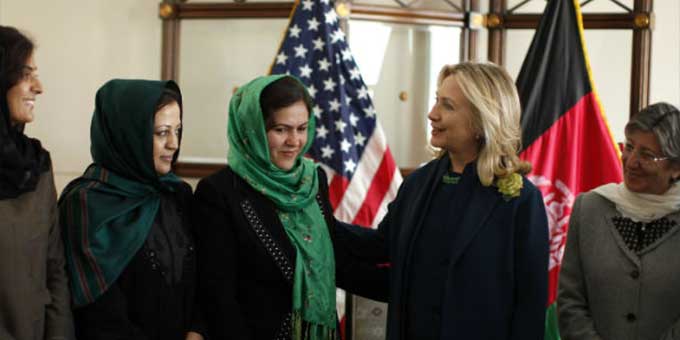 On March 21st, U.S. Secretary of State Hillary Clinton and Former First Lady Laura Bush met in Washington D.C. to celebrate the 10th anniversary of the U.S.-Afghan Women’s Council. In her remarks, Secretary of State Clinton reaffirmed a commitment to Afghanistan, its women, and AUAF. “The fight against terrorism is also a fight for the rights and dignity of women. So we must use every available tool to support that commitment.”

Toward that end, Secretary Clinton announced the United States has sponsored the creation of the International Center for Afghan Women’s Economic Development. The Center broke ground on February 2nd on the university’s campus in Kabul.  In attendance were senior guests from the U.S. Department of State, Department of Defense and USAID, including Ambassador Ryan Crocker and USAID Mission Director Ken Yamashita. Female members of Parlia­ment and government ministers, as well as the head of the Afghan Independent Human Rights Commission, Dr. Sima Samar, also participated in the ceremony.

Dr. C. Michael Smith, president of AUAF, noted, “Nothing like this has even been done before. To those concerned about the future of education and women’s rights in this country, today sends a powerful mes­sage: this university is here for the long term, and we will stand by our programs that view the success of women as a critical component stabiliz­ing this country.”