NYT: Taliban Rewind the Clock: ‘A Woman Is a Helpless and Powerless Creature’ 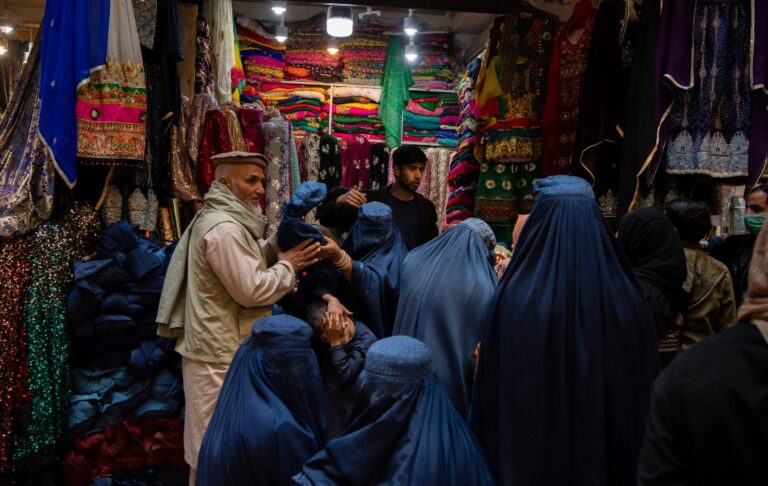 Education is Power for Peace and Security in Afghanistan

New York Times
Taliban Rewind the Clock:
'A Woman Is a Helpless and Powerless Creature'

KABUL, Afghanistan — Girls are barred from secondary schools and women from traveling any significant distance without a male relative. Men in government offices are told to grow beards, wear traditional Afghan clothes and prayer caps, and stop work for prayers.

Music is officially banned, and foreign news broadcasts, TV shows and movies have been removed from public airwaves. At checkpoints along the streets, morality police chastise women who are not covered from head to toe in all-concealing burqas and headpieces in public.

A year into Taliban rule, Afghanistan has seemed to hurtle backward in time. The country’s new rulers, triumphant after two decades of insurgency, have reinstituted an emirate governed by a strict interpretation of Islamic law and issued a flood of edicts curtailing women’s rights, institutionalizing patriarchal customs, restricting journalists and effectively erasing many vestiges of an American-led occupation and nation-building effort.

“My house has become my world,” Ms. Alyar. said. “I used to go out, I had freedom, but not anymore.”
Kiana Hayeri for NYT
Munisa Mubariz leading a protest in Kabul in May. When Taliban gunmen ordered her and other demonstrators to stop a recent rally, she shouted: “You cannot stop our voices!”
Kiana Hayeri for NYT

For many Afghans — particularly women in cities — the sense of loss has been devastating. Before the Taliban seized power, some young people realized ambitions of becoming doctors, lawyers and government officials, and explored international opportunities, as well.

“Now it’s gone — all of it,” said Zakia Zahadat, 24, who used to work in a government ministry after she earned a college degree. She is mostly confined to home these days, she said. “We have lost the power to choose what we want.”

Before the Taliban seized power, men and women mingled, picnicking together in parks and chatting over cappuccinos
Jim Huylebroek for NYT

Before the Taliban seized power, men and women picnicked together in parks on weekends and chatted over cappuccinos in its coffee shops. Girls in knee-length dresses and jeans tore around skate parks and built robots in after-school programs. Clean-shaven men wore Western suits to work in government offices, where women held some high-ranking positions.

Today, in coffee shops, public parks and other public spaces, men and women have been confined to separate sections or are open to each on separate days.

With the restrictions on women, crackdown on freedom of expression and policymaking in the Taliban’s interim government confined to a select few men and religious scholars, most Afghans have lost any hope of having a hand in molding the future of their country.

“Many people have lost their sense of safety, their ability to express themselves,” said Heather Barr, associate director of the Women’s Rights Division at Human Rights Watch. “They’ve lost their voice — any feeling that they could be part of building a country that looks the way they want it to.”

Before the Western government collapsed last year, Fereshta Alyar, 18, had been in 12th grade and preparing to take the national university entrance exam. Every day she spent her mornings doing homework, went to school and to an after-school math program in the afternoons, then returned home to study more.

For months after the Taliban seized power and closed girls’ secondary schools indefinitely, she fell into a deep depression — the seemingly endless possibilities for her future vanished in an instant. Now she spends her days at home, trying to muster the willpower to study her old English language textbooks alone. Like many of her old classmates, Ms. Alyar survives on the hope of one day leaving the country, she says.

© Friends of the American University of Afghanistan 2023