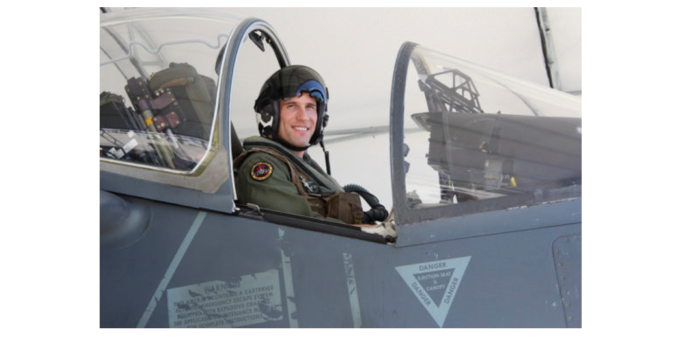 As a first-year college student in 2001, Matt Martinez had a plan: earn a bachelor’s degree in history and proceed directly to law school.

Matt Martinez spent more than 12 years in the U. S. Marine Corps before enrolling at Stanford Law School.

But after the September 11, 2001, attacks, Martinez decided to postpone law school to become a pilot in the U. S. Marine Corps.

“I couldn’t have seen not being involved somehow, especially when so many other people of my age were fighting,” he said. “What right did I have not to be one of those people?”

Martinez, who served in Afghanistan, Iraq and Libya, was a major by the time he left the Marines in July 2017. Two months later, he was sitting in a classroom at Stanford Law School – a civilian, a student and a veteran – ready to pursue his dream of becoming an attorney.

This fall, Martinez will begin his third – and final – year of law school. “I love it,’ he said during a recent interview in a conference room in the Robert Crown Law Library. “Looking back, I wouldn’t have chosen anywhere else.”

One of the programs that drew Martinez to Stanford Law School was the Afghanistan Legal Education Project, which produces textbooks for undergraduate students studying law at the American University of Afghanistan in Kabul.

Students accepted into the project begin the academic year studying the legal system of Afghanistan – the country’s civil laws, its new penal code, and the influence of customary and Islamic law on the development of Afghan criminal law. Then, they turn their attention to researching and writing individual chapters.

“The Afghanistan Legal Education Project offered an avenue to contribute in a small way as a law student to the ongoing process of rebuilding Afghanistan and to creating the conditions there that might eventually lead to peace and stability,” Martinez said.“During my time in the military, I served in several parts of the world that were in the midst of armed conflict or were recovering from it. I saw the necessity of establishing the rule of law in those places. This project is a way for me to contribute to that goal.”

This year, Martinez also participated in the Criminal Prosecution Clinic, one of 11 full-time clinics offered by the School’s Mills Legal Clinic. During the clinic, Martinez and five other students spent four days a week assisting prosecutors in the Santa Clara County District Attorney’s Office and arguing cases in Santa Clara County Superior Court.

“During the clinic, I interviewed witnesses, drafted evidentiary motions and argued those motions in court, and conducted preliminary hearings,” Martinez said. “Most of my cases involved drunk driving or weapons possession, but I also did some violent felony cases.”

The students also met for weekly classroom sessions to discuss a wide range of criminal justice issues, such as prison conditions and prison reform and the impact of race, gender and class on the quality of justice. They also visited local prisons.

“It was a very rewarding experience that gave me a lot of courtroom practice but also taught me to think deeply about the criminal justice system in ways I hadn’t previously,” Martinez said.

Community of veterans at Stanford Law

Martinez, who earned a bachelor’s degree in history from Louisiana State University, spent more than 12 years in the Marines before arriving at Stanford.

In addition to flying more than 240 combat missions in Afghanistan and Libya, Martinez spent three years on the ground helping pilots pinpoint enemy targets. During that time, he led a ground team that could quickly rescue downed pilots and support troops engaged in combat in Iraq. He also spent time in East Africa assisting special operations forces that were conducting missions against various terrorist groups.

Today, he is one of 17 veterans studying at Stanford Law School, where he serves as co-president of the Stanford Law Veterans Organization, along with Niko Eren, a former Navy SEAL. The student group recently hosted a campus event commemorating Memorial Day.

This summer, Martinez will return to the San Diego office of the law firm Cooley LLP for the second year in a row to work as an intern in its litigation practice.

“The richness of the educational experience I’ve had so far has exceeded my expectations,” Martinez said. “I’m excited to be able to use the tools I’ve gained here in the real world. I look forward to remaining involved in advocacy for veterans and in rule-of-law programs.”