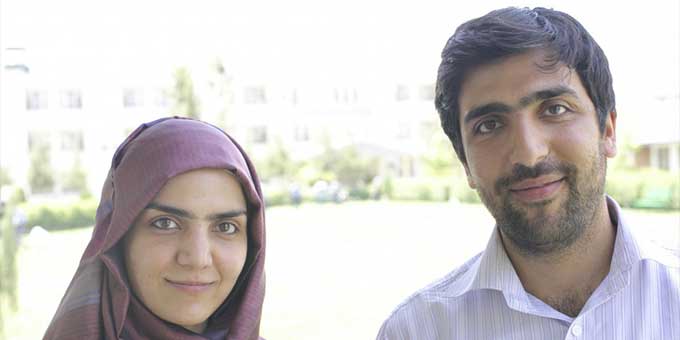 Two of the American University of Afghanistan’s own, brother and sister Wasey and Fazila Rahimi, stunned Afghanistan’s collegiate debate watchers by winning the Afghan National Debate Championship over the weekend.

Taking place over two days from June 21st to the 22nd, the event involved a total of 64 competitive debate teams representing 23 different universities from all corners of Afghanistan. Dutch Ambassador Han Peters and international debate experts from across Asia judged the championship series, which was sponsored by the International Foundation for Electoral Systems (IFES) and the American University of Afghanistan (AUAF).

“We never expected a victory at this level since we only formed our debate team this past February,” said Fazila Rahimi, who debated in the British-parliamentary-style setting in the position of government “whip”.

“This was my first time debating in front of such a large crowd, on a stage, speaking into a microphone,” added Wasey Rahimi. “There were a lot of distractions, but once we received our motion and began formulating our attack strategy, I was able to calm down. When our opposition revealed their own strategy, one which we had anticipated, I turned to Fazila and said ‘We’re going to win this.’”

The AUAF team coach, Shoaib Rahim, a former Fulbright Scholar who studied at Duke University, expressed elation after the victory and praised the organizers. He said the vibrant debate was a testament to the dynamism and democratic leanings of Afghanistan’s youth generation.

“Most of these debate teams have been participating in debate tournaments for several years,” said Rahim. “Our nascent AUAF debate team managed to win the National Debating Championship after five months of training and competition. This goes to show the high level of dedication and commitment these students have toward the growth of competitive debating at AUAF.”

AUAF, modeled on the great American universities in Beirut and Cairo, is Afghanistan’s only private, not-for-profit, non-partisan and co-educational university. It opened its doors in 2006 with an initial enrollment of 50 students, and today enrolls more than 1,300 full and part-time students. It has produced eleven Fulbright Scholars and maintains partnerships with the world’s most prestigious universities, including Stanford University, Georgetown University, and the University of California network.