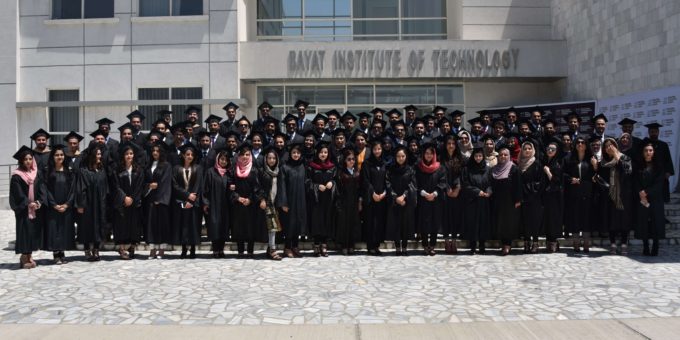 The event commenced by a welcoming remarks by Dr. Holland, President of the University. He recognized late Dr. Sharif Fayez’s, AUAF’s Founder, passion and commitment to the University and higher education in Afghanistan.

Dr. Hamdullah Mohib, expressed his gratitude to AUAF in fighting and defeating violence and war through education. He stated “AUAF is a testament to the fact that—despite whatever differences or challenges we may face along the way—the US-Afghan partnership is strong, and that both of our countries, as key allies, have the same vision for the country’s future for prosperity and peace. We both believe in the same values to realize that vision—education, tolerance, and progress.”

This year, AUAF presented Mrs. Holly Holzer, U.S. Diplomat and spouse of the U.S. Ambassador to Afghanistan, the Honorary Doctorate Degree of Humane Letters. During her remarks, Mrs. Holzer stated “we are all the superheroes of our own lives, so ask yourself, what are your superpowers and how will you use them for good?”

The American University of Afghanistan was founded in 2006 and has graduated more than twelve hundred students with both masters and undergraduate degrees. AUAF provides an international standard of education of the highest possible quality through devoted international and national faculty. The university has trained some of the foremost leaders of Afghanistan and is committed to contributing to a prosperous future for the country by educating tomorrow’s leaders.