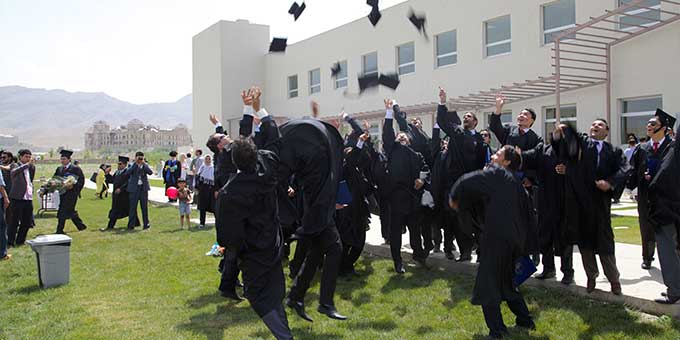 On May 25, 2013, the American University of Afghanistan celebrated its third graduation since opening its doors in 2006. 89 undergraduates received their degrees – nearly doubling the number of AUAF alumni – while 23 students received their MBAs, the first-ever issuance of this degree in Afghan history.

“This has been an exciting day for me, but also a serious one,” said graduating senior Angela Niazmand. “Today I know that my responsibility to my country is greater than ever now that I hold this degree. I also have greater responsibility to myself, and when the celebrating is over it will be time to look into graduate programs and continue advancing my education.”

Former U.S. Ambassador to Afghanistan, Ryan Crocker, Nancy Hatch Dupree of Kabul University’s Academic Centre, and Leslie M. Schweitzer, president of Friends of AUAF, received  honorary doctorates from AUAF at the ceremony, which recognized them for their incredible dedication to higher education in Afghanistan. While accepting the award, Crocker implored students to use the knowledge they had gained at AUAF “Education is the great equalizer. It removes the barriers between economic classes, between ethnic groups. It unites us in an appreciation of the power of the human intellectual heritage that we all share. Continued advances in human knowledge, brought about by education, are the critical elements in the development on individual nations and communities of nations. And this is what is happening in Afghanistan now.” (Read his full speech here)

AUAF, modeled on the great American universities in Beirut and Cairo, is Afghanistan’s only private, not-for-profit, non-partisan and co-educational university. It opened its doors in 2006 with an initial enrollment of 50 students, and today enrolls over 2,000 full and part-time students. It has produced eleven Fulbright Scholars and maintains partnerships with the world’s most prestigious universities, including Stanford University, Georgetown University, and the University of California network.