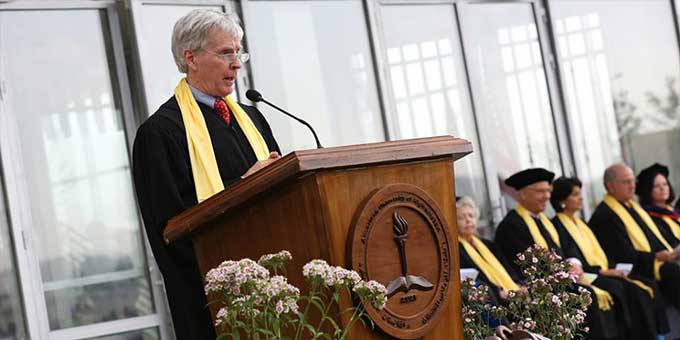 Former U.S. Ambassador to Afghanistan, Ryan Crocker receives an honorary degree and gives the commencement speech at the American University of Afghanistan Graduation Ceremony, May 25th, 2013.

“Thank you, President Smith. It is an enormous privilege to be able to address the American University of Afghanistan’s third graduating class – and its  first MBA class.

All commencements are special, but we come together on a particularly significant occasion. Over the last 18 hours, we have seen  the old Afghanistan and the new, the Afghanistan of the past and of the future. The Afghanistan of the past was represented by the terrorists who attacked the UN compound here in Kabul yesterday evening. They struck at the symbol of Afghanistan’s international support, and they failed, killed by the Afghan National Police. We mourn the loss of two innocent victims and pray for the swift recovery of the wounded. And this morning, here you all are, the Class of 2013, representing the new Afghanistan, neither deterred nor intimidated by such actions and determined to write a brilliant new chapter in the history of this great country. You will prevail, and I am proud to stand with you.

I have a long if episodic association with Afghanistan, through good times and bad. I fell in love with this country when I first visited as a student, about a year younger than those who are graduating today. After the fall of the Taliban, I returned to reopen the American Embassy and saw first hand the utter devastation that had been wrought by the Soviet occupation, the civil war of the 90s and the Taliban’s despotic rule. I came back again, as the American Ambassador, in 2011. Afghanistan was virtually unrecognizable – in a positive sense.

These are some of the accomplishments I saw during a decade of amazing change brought about by an extraordinary Afghan and international partnership. In 2002, life expectancy was just over 40 years. In 2012, it was 63. In 2002, there were less than 50 miles of paved roads in the entire country. In 2012, there were 7450. A Gross Domestic Product of $2 billion in 2002 increased ten fold to $20 billion in 2012. In 2002, there were fewer than 450 health care facilities. Now, there are more than 1800. As a result, infant and maternal mortality have been cut in half.

There has been a communications and media revolution. A single TV station operated in 2002. Over 70 are on the air now, along with more than 100 radio stations and scores of  newspapers, reflecting every conceivable viewpoint. And the Afghan people are watching and listening. 60% regularly watch TV while 95% listen to the radio. There were no mobile phones in 2002; 20 million people have them today. 20% of the population has access to the internet; no one did in 2002.

This degree of progress was inconceivable when I first raised the flag over our Embassy more than a decade ago. But perhaps the most significant change of all has been in education. At that time 900,000 students were in Afghan schools, virtually all of them  boys. Today that  number is close to 8.5 million, about 40% of whom are girls. In higher education, there are 76 private universities and 32 public institutions. And by any measure, the flagship university for the nation is this one: the American University of Afghanistan.

I would like to spend a few minutes on education – after all, that is why we are here this morning. As President Smith noted, I have spent most of my professional career in the US Foreign Service, and I have been fortunate to work in some of the most interesting places in the world at key junctures in their history and in the history of the US, including Afghanistan. But I have also spent time as an educator – I am currently on  the faculty at Yale and the University of Virginia, and in the fall, I will return to Texas A&M University where I a Dean of the Bush School of Government and Public Service. So in addition  to appreciating the power of diplomacy to improve our world, I am a strong believer in  the power of education. We all know that education can make a tremendous difference in the lives of individual students – it certainly has in yours. But at the level of societies and nations, education also plays another important role.

Education is the great equalizer. It removes the barriers between economic classes, between ethnic groups. It unites us in an appreciation of the power of the human intellectual heritage that we all share. Continued advances in human knowledge, brought about by education, are the critical element in the development on individual nations and communities of nations. And this is what is happening in Afghanistan now.

It is what is happening at this great university. It is the product of  vision and determination by a number of individuals, Afghan and American, many of whom are here today. Dr. Zalmay Khalilzad, a predecessor of mine as US Ambassador in both Iraq and Afghanistan, was a key figure in founding the American University of Afghanistan in 2004 and 2005. During my service as ambassador in Kabul, it was my pleasure to ensure that the embassy continued to support the university, and to help President Smith and the Board of Trustees in realizing their ambitious goals for the university and for the people of Afghanistan. I commend the Trustees for their leadership and dedication as well as the Friends of AUAF under the formidable leadership of Leslie Schweitzer  – your efforts have made this university what it is today.

AUAF’s record of success in a very short period is amazing. 50 students were present when the University opened in 2006. Now there are almost a thousand. The University offers a wide range of degree programs in fields most important to a developing country like Afghanistan – business, information technology and computer science, public administration and political science, mass communication and law. AUAF has the nation’s first western MBA program, and today the first class graduates. The Afghan government has taken notice, and is enrolling three cohorts from the Ministry of Finance. Bringing international best business practices to a key ministry will make a huge difference in governance.

Perhaps no element of the University’s achievement has been more significant and more important for Afghanistan’s future than its focus on advancing the role of women. Providing education for women was one of the founding principles of the University, and it  has been remarkably successful. Today the University’s student body is 31% female, and women made up more than half the entering class this year. I am pleased that 50 scholarships for women, funded by the US Embassy, are allowing young women with the intellectual skills but not the financial resources to realize the dream of a quality western education.

In addition to championing the education of women, the University is also involving them in the Afghan economy. When I was here as ambassador it was my privilege in February 2012 to participate in the ceremonial groundbreaking for the International Center for Afghan Women’s Economic Development. Today, we formally dedicated the Center. It will help women play a significant role in the Afghan economy, changing the lives of these women while contributing to the development of the nation as a whole.

The United States government has been proud to support this university in its early years through USAID, the Embassy’s Public Affairs section and the Department of Defense’s Task Force for Business and Stability Operations. A recent US government grant of $7.4 million through Stanford University, for example, has made possible the establishment of AUAF’s new law school. That support will continue. At the same time, we expect that the percentage of funds from individual and corporate donors, Afghan and American, will increase.

When I was here as ambassador, I found that a bad day could always be redeemed by a visit to this campus. Spirited exchanges with students left me with the conviction that I was talking to the future of Afghanistan, and it was a bright one. I remember in particular one young woman who expressed appreciation for US assistance to education and to women, but wondered if our commitment would continue or would we again turn our back on Afghanistan as we did following the Soviet withdrawal in 1989.

The answer is an emphatic no- we will maintain our commitment. We have learned from history. Agreements are in place at the bilateral, regional and international levels to insure that Afghanistan is  not again abandoned. Bilaterally, the Afghan – US Strategic Partnership Agreement signed a year ago in Kabul by Presidents Karzai and Obama links our two nations in a strategic alliance through 2024 in areas such as security, economic growth, education and information technology. We are now negotiating a Bilateral Security Agreement that will signal to our allies and our adversaries alike that Afghanistan and the United States stand together. On the regional level, the Istanbul Process and the New Silk Road initiative promise a more integrated and economically developed future for Afghanistan and Central Asia. And internationally,  the NATO Summit in Chicago last May produced financial pledges from the international community to support Afghan National Security forces in the years ahead. Two months later, the international community met again in Tokyo, this time to pledge $16 billion in economic assistance in the years beyond 2014. Taken together, these are powerful signals that Afghanistan will never again be left alone to suffer the horrors of civil war and Taliban tyranny.

But perhaps the best guarantee that Afghanistan will move to a future of stability, security and prosperity is right here. It’s all of you, the students and graduates of AUAF. You are the post-Taliban generation, and your education, values and ideals are a formidable bulwark against the return of violent extremism. You are linked in, wired up and switched on. Your generation represents the empowerment of women, and you are connecting to a growing, entrepreneurial private sector. In short, you are a community of young men and women that Afghanistan has never seen before.

Much is expected from those to whom much has been given. You have been given a world class education. What you must give in return is the energy and commitment to create a new Afghanistan, an Afghanistan in which the dark days of the past remain buried there.

Good luck, graduates. Enjoy the day. Reality begins tomorrow. Be on time for it.”