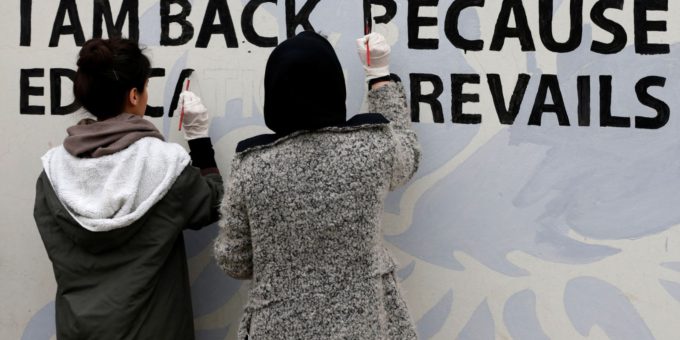 KABUL —
Activists in Afghanistan are speaking out against corruption and spreading messages of peace and social justice with murals, many painted on concrete blast walls that have risen to ward off militant bombs.

The activists call themselves the ArtLords, as opposed to the warlords and drug lords who have brought so much strife and misery to Afghanistan, and say their art is a tool for social change.

Blast walls have gone up along Kabul’s streets over the years, against a tide of violence as Taliban and other militants battle the government and U.S.-led forces, nearly 17 years after Afghanistan’s latest phase of war began.

Some city streets have been turned into concrete canyons, the walls shielding embassies, military camps, government offices and the homes of the rich.

On many of these grey slabs, the ArtLords have their say.

Watchful eyes peer from a wall protecting the headquarters of the main security agency.

“I can’t go to school because of your corruption. I can see you,” is the message on a mural of a girl on blast walls near the interior ministry.

Another mural, of a black SUV with its windows tinted, takes a dig at the powerful and privileged.

“What are you carrying, that your windows are black?” reads the message. “You don’t have a license plate and don’t stop for searches.”

A painting of a shoeshine boy says: “Don’t set off an explosion here, innocent people get killed.”

Sharifi says he always gets permission for his work, though it can be a struggle. The group gets commissions from Afghan and international groups for “awareness raising and advocacy” and sells smaller artworks.

Recently, on a cold, grey morning, the ArtLords were at the American University of Afghanistan, working on a mural on the tightly guarded campus to highlight resilience against violence.

A 2016 militant attack on the university killed 16 people and shattered its image as an island of liberalism and learning.

Students came to help paint a picture of a young man and woman picking up their books, with a phoenix rising and the words: “I am back because education prevails.”

“Kabul has been surrounded with blast walls which infuriate people but this art has a message of hope,” said student Faisal Imran, who took his turn with a brush.